Love him, or hate him

2016: Obama’s America takes audiences on a gripping visual journey into the heart of the worlds most powerful office to reveal the struggle of whether one man’s past will redefine America over the next four years. The film examines the question, “If Obama wins a second term, where will we be in 2016?” Across the globe and in America, people in 2008 hungered for a leader who would unite and lift us from economic turmoil and war. True to Americas ideals, they invested their hope in a new kind of president, Barack Obama. What they didn’t know is that Obama is a man with a past, and in powerful ways that past defines him–who he is, how he thinks, and where he intends to take America and the world. Immersed in exotic locales across four continents, best selling author Dinesh DSouza races against time to find answers to Obama’s past and reveal where America will be in 2016. 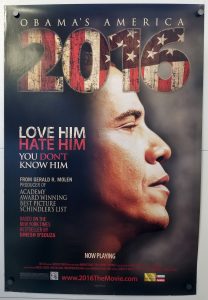