We use cookies to ensure that we give you the best experience on our website Close
View cart “Al McCoy” has been added to your cart.

Complete with the original envelope it was mailed in, in 1947! McCoy was a boxing World Middleweight Champion from 1914-1917.

Condition: Fine to Very Fine
Please check the included image closely to assist you in your purchasing decision.

Referees and judges in this era could not render a decision for fights in New York and most other states except in the case of a disqualification or knockout. McCoy’s BoxRec record on the right has newspaper coverage determining the winner for his large number of no decision bouts. Newspapers could also determine the outcome of a fight as a draw. 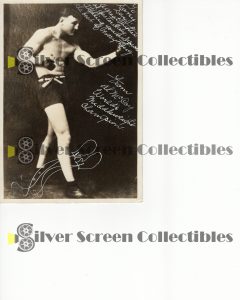