Condition: Souvenir Program is in Good Condition – With small creases (a roughly 1.5″ creases in the upper right corner, and several small ones on the spine. The French Mini Lobbies are in Fine – With a few corner bumps.
Please check the included image(s) closely to assist you in your purchasing decision.

At the height of the Vietnam war, Captain Benjamin Willard is sent on a dangerous mission that, officially, “does not exist, nor will it ever exist.” His goal is to locate – and eliminate – a mysterious Green Beret Colonel named Walter Kurtz, who has been leading his personal army on illegal guerrilla missions into enemy territory. 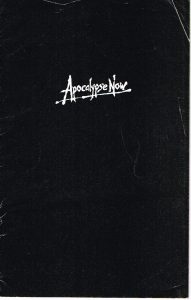