A true Hollywood legend!!
Inscription: To Loney, Your Friend

Signature is on a vintage/original photo?: No

Condition: Fine – With staple holes on the top edge.
Please check the included image closely to assist you in your purchasing decision.

Biography: Burton Leon “Burt” Reynolds Jr. (February 11, 1936 – September 6, 2018) was an American actor. Some of his memorable roles include Bo ‘Bandit’ Darville in Smokey and the Bandit, Lewis Medlock in Deliverance, Bobby “Gator” McCluskey in White Lightning and sequel Gator, Paul Crewe and Coach Nate Scarborough in The Longest Yard and its 2005 remake respectively, J.J. McClure in The Cannonball Run, the voice of Charlie B. Barkin in All Dogs Go to Heaven, and Jack Horner in Boogie Nights. He is one of America’s most recognizable film and television personalities with more than 90 feature film and 300 television episode credits.

Description above from the Wikipedia article Burt Reynolds, licensed under CC-BY-SA, full list of contributors on Wikipedia 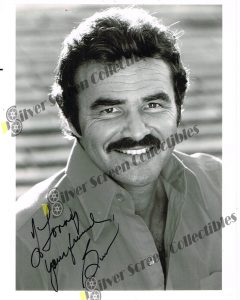