Awesome graphics of Bud & Lou flanking Nancy Guild, with the outline of the Invisible Man “Monster” in the background.
Note: This poster has been linen backed, which adds approximately 1″ on each side, due to overlap size of the backing.

Condition: Very Fine – Restored on linen, so it looks great!
Please check the included image(s) closely to assist you in your purchasing decision.

Boxer Tommy Nelson is accused of killing his manager. While detectives Bud and Lou investigate they come across an invisibility formula with which Tommy injects himself rather than face the police. This sparks an idea for trapping gangster Morgan by having Lou fight champ Rocky Hanlon, with Tommy’s invisible help

Pull Back The Curtain… 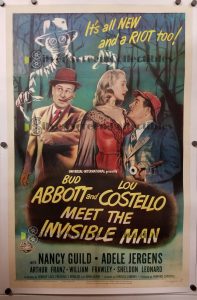 *******We are still "tweaking" our new/upgraded store, and working to get all of our inventory online, so check back often!******* Dismiss