The Best Little Whorehouse in Texas (1982)

Biography: WWII veteran, dance instructor and diversely talented stage & screen actor are all inclusions on the resume of this perpetually busy US actor who didn’t get in front of the cameras until around the time of his fortieth birthday. The stockily built Charles Durning is one of Hollywood’s most dependable and sought after supporting actors who first got his start in guest appearances in early 1960’s TV shows. He scored minor roles over the next decade until he really got noticed by film fans as the sneering, corrupt cop “Lt. Snyder” hassling street grifter ‘Robert Redford’ in the multi award winning mega-hit The Sting (1973). Durning was equally entertaining in the Billy Wilder production of The Front Page (1974), he supported screen tough guy Charles Bronson in the suspenseful western Breakheart Pass (1975) and featured as “Spermwhale Whalen” in the story of unorthodox police behavior in The Choirboys (1977).

The versatile Durning is equally adept at comedic roles and demonstrated his skills as “Doc Hopper” in The Muppet Movie (1979), a feisty football coach in North Dallas Forty (1979), a highly strung police officer berating maverick cop Burt Reynolds in Sharky’s Machine (1981), and a light footed, dancing Governor (alongside Burt Reynolds once more) in The Best Little Whorehouse in Texas (1982). Durning continued a regular on screen association with Burt Reynolds appearing in several more feature films together and as “Dr. Harlan Elldridge” in the highly popular TV series Evening Shade (1990). On par with his multitude of feature film roles, Durning has always been in high demand on television and has guest starred in Everybody Loves Raymond (1996), Monk (2002) and Rescue Me (2004). Plus, he has appeared in the role of “Santa Claus” in five different television movies. 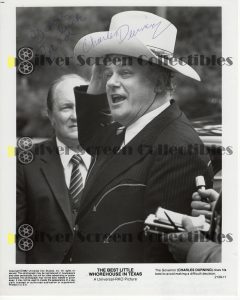