Condition: Good to Very Good – With vertical and horizontal creases, soiling, a chip out of the upper left corner, a tear on the right border, and edge wear.
Please check the included image closely to assist you in your purchasing decision.

Two mysterious seamen come from Alan Rogers’ past to blackmail him as he seeks to locate his missing daughters. Ellery Queen is called in by Stewart Cole, Rogers’ secretary. Queen goes to the estate and finds one daughter already there and the second one expected. When she arrives, it is Ellery’s secretary Nikki Porter posing as the daughter as Ellery had her intercept the real heiress after learning of a plot to swindle Rogers. The blackmailing seamen are killed at a waterfront café after getting the blackmail money, Rogers is suspected and Inspector Queen arrives to arrest him, but he is also found dead. 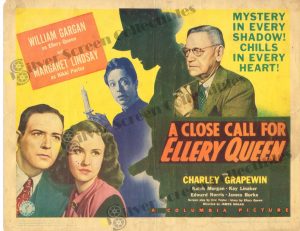