Condition: Very Good – With varying condition among the cards, including pin/staple homes, minor soiling (card 2 appears to have a heel print on it), small wrinkles and all cards have a a bit of a curve to them (probably from improper storage). Card 8 has a stain on the upper right edge, and a horizontal crease.
Please check the included image closely to assist you in your purchasing decision.

In 1883, US Cavalry lieutenant Matthew Hazard, newly graduated from West Point, is assigned to isolated Fort Delivery on the Mexican border of Arizona, where he meets commanding officer Teddy Mainwarring’s wife Kitty, whom he later rescues from an Indian attack. 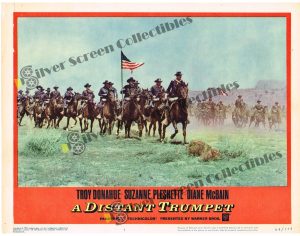