Card #: 4 | Warner Bros. presents its intimate new use of CinemaScope and Warnercolor”; adapted from the classic novel by John Steinbeckn.

In the Salinas Valley, in and around World War I, Cal Trask feels he must compete against overwhelming odds with his brother for the love of their father. Cal is frustrated at every turn, from his reaction to the war, to how to get ahead in business and in life, to how to relate to estranged mother. 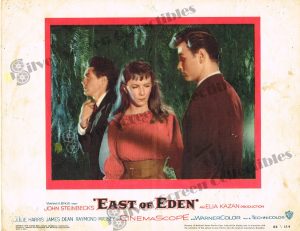