Elementary Art: 100 Years of Sherlock Holmes and chronicles over 100 years of movie posters and images from Sherlock Holmes films, spanning silent pictures to present day. With over 350 images, the book follows the movie poster art from the silent era to modern day.

Starting off with a brief history of Holmes creator Sir Arthur Conan Doyle, the book offers background details on how Sherlock was originally brought to life on stage, through the collaboration between Doyle and American actor William Gillette. You will find (we believe) never before seen rare photos of Gillette’s early (1899) theatrical production of Sherlock Holmes on stage in New York city.

The poster art kicks off with 1920’s productions featuring Ellie Norwood in the lead role, and runs through the resurgence of Holmes, through actor Robert Downey Jr.’s gritty portrayal in the 2009 & 2011 Warner Brothers feature films.

Elementary Art: 100 Years of Sherlock Holmes, will be enjoyed by fans of Holmes and non-fans alike with references to Sherlock’s impact on popular culture, and a wide range of beautiful Holmesian artwork.

You can read Leonard Maltin’s gracious review of the Elementary Art on his WEBSITE.

You can use our CONTACT page if you would like the book signed by author William S. Major at no additional cost. Reference your order number and make a note of any inscription you’d like, to personalize your copy. 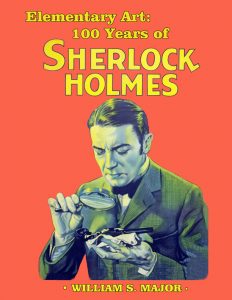