BOTH Farrah Fawcett and (then) husband Lee Majors signed this January 19, 1976 People Magazine, prominently in blue. This item has been professionally framed with non-glare plexi. The (complete) magazine itself is being preserved inside a sealed crystal clear, UV protected, mylar (acid free) sleeve. The frame measures 13.25″ x 16.5″. We apologize for the glare on this (non-glare) plexi.

Lee Majors (born Harvey Lee Yeary on April 23, 1939) is an American television, film and voice actor, best known for his roles as Heath Barkley in the TV series The Big Valley (1965–69), as Colonel Steve Austin in The Six Million Dollar Man (1973–78) and as Colt Seavers in The Fall Guy (1981–86). In the late 1980s and 1990s, he reprized the role of Steve Austin in a number of TV movies, and appeared in a number of supporting, recurring and cameo roles in feature films and TV series, and lent his voice to a number of animated TV series and video games.

Biographies From Wikipedia, the free encyclopedia. 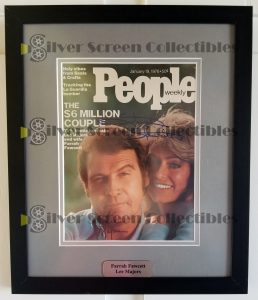 You're viewing: Farrah Fawcett and Lee Majors $750.00
Add to cart