| Signed by Virginia Mayo (With COA).

Condition: Ver Good to Fine – With minor paper loss on center folds, and a couple of extra fold lines on the upper center fold.
Please check the included image closely to assist you in your purchasing decision.

After a card game Southerner Owen Pentecost finds himself the owner of a Denver hotel. Involved with two women – one who came with the hotel, and one newly arrived from the East to open a dress shop – he then has to make even more fundamental choices when, with the start of the Civil War, he becomes one of a small minority in a strongly Unionist town. 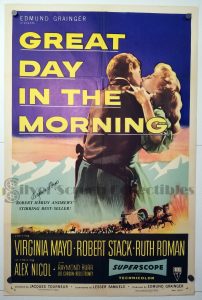