This is a very rare original/production ANIMATION CEL (with original production art background), featuring a beautiful green circular background, and (we believe…but can’t verify, 1960’s) Warner Brothers shield logo. This item does not have a WB COA with it, as it was not something that was sold as a collectible, but was rather probably originally acquired directly from a WB animator, straight from production. It measures roughly 16½”x12½”. Finding a closing credit title card cells like this is extremely rare, as there would have only been a few of them made, and which were potentially used on multiple cartoons (there are no production numbers on the cell). This is a collectors dream come true!! 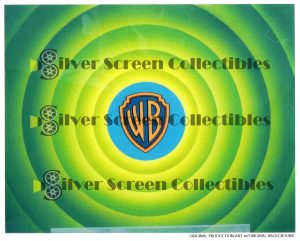