Card #: SET | Although not dated, we believe this set is from a 1940’s re-release. All cards have a stamp on the reverse that reads “Latino Films Habana, Cuba”. You’ll thrill to their vivid portrayal of undying love… Tender kisses in the romantic moonlight… Two people born to happiness so great a world could not come between them… From the novel ‘Summer Lightning”.


Condition: Good – With varying condition among the cards, with pin holes, some soiling/staining and overall yellowing.
Please check the included image closely to assist you in your purchasing decision.

In Vermont, college student Ives Towner refuses to marry his longtime girlfriend, Julie Weir, until he has a career. Soon after, Julie meets and grows infatuated with handsome writer Michael Shaw, and they marry and move to Paris. Years later, after Michael’s accidental death, Julie and her daughter move back to Vermont to live with her aunt and Julie finds Ives, now a professor, disinterested in resuming their romantic relationship. 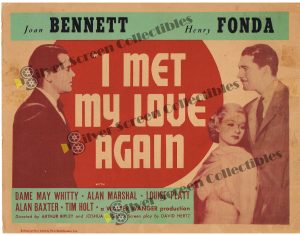