This Technicolor musical biopic stars Argentina-born Dick Haymes as Irish-American composer Ernest R. Ball. Climbing to fame with such sentimental songs as “When Irish Eyes are Smiling” (hence the title), Ball romances a lovely showgirl (June Haver), who in turn catches the eye of a charming underworld character (Anthony Quinn). Monty Woolley does a variation of The Man who Came to Dinner in his role as a roguish Broadway producer. Seldom cluttering up its story with the facts, Irish Eyes are Smiling is chiefly a showcase for the superb singing of Dick Haymes. The film was produced by legendary journalist Damon Runyon, which should surprise several citizens more than somewhat. 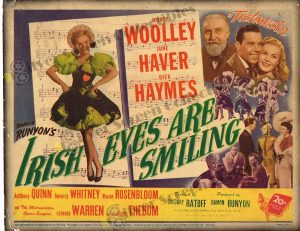