Biography: Iron Eyes Cody (born Espera Oscar de Corti), was an Italian-American actor. He portrayed Native Americans in Hollywood films, famously as Chief Iron Eyes in Bob Hope’s The Paleface. He also played a Native American shedding a tear about litter in one of the country’s most well-known television public service announcements, “Keep America Beautiful”. Cody began acting in the early 1930s. He worked in film and television until his death. Cody claimed his father was Cherokee (and his mother Cree), also naming several different tribes, and frequently changing his claimed place of birth. To those unfamiliar with Indigenous American or First Nations cultures and people, he gave the appearance of living “as if” he were Native American, fulfilling the stereotypical expectations by wearing his film wardrobe as daily clothing—including braided wig, fringed leathers and beaded moccasins—at least when photographers were visiting, and in other ways continuing to play the same Hollywood-scripted roles off-screen as well as on.

He appeared in more than 200 films, including The Big Trail with John Wayne; The Scarlet Letter, with Colleen Moore; Sitting Bull, as Crazy Horse; The Light in the Forest as Cuyloga; The Great Sioux Massacre, with Joseph Cotten; Nevada Smith, with Steve McQueen; A Man Called Horse, with Richard Harris; and Ernest Goes to Camp as Chief St. Cloud, with Jim Varney.

In 1953, he appeared twice in Duncan Renaldo’s syndicated television series, The Cisco Kid as Chief Sky Eagle. He guest starred on the NBC western series, The Restless Gun, starring John Payne, and The Tall Man, with Barry Sullivan and Clu Gulager. In 1961, he played the title role in “The Burying of Sammy Hart” on the ABC western series, The Rebel, starring Nick Adams. A close friend of Walt Disney, Cody appeared in a Disney studio serial titled The First Americans, and in episodes of The Mountain Man, Davy Crockett and Daniel Boone. In 1964 Cody appeared as Chief Black Feather on The Virginian in the episode “The Intruders.” He also appeared in a 1968 episode of Mister Rogers’ Neighborhood featuring Native American dancers.

Cody was widely seen as the “Crying Indian” in the “Keep America Beautiful” public service announcements (PSA) in the early 1970s.The environmental commercial showed Cody in costume, shedding a tear after trash is thrown from the window of a car and it lands at his feet. The announcer, William Conrad, says: “People start pollution; people can stop it.”

The Joni Mitchell song “Lakota”, from the 1988 album, Chalk Mark in a Rainstorm, features Cody’s chanting. He made a cameo appearance in the 1990 film Spirit of ’76. 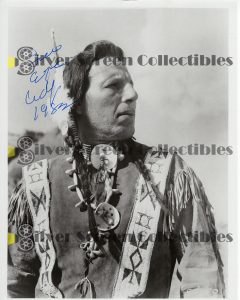