Condition: Good – With surface scratches, corner bumps and minor damage on the lower right edge.
Please check the included image closely to assist you in your purchasing decision.

Biography: Robards moved to New York City and began working on radio and stage. His first role was the 1947 short film Follow That Music. His big break was landing the starring role in José Quintero’s 1956 off Broadway theatre revival production and the later 1960 television film of O’Neill’s The Iceman Cometh, portraying the philosophical salesman Hickey; he won an Obie Award for his stage performance. He later portrayed Hickey again in another 1985 Broadway revival also staged by Quintero. Robards created the role of Jamie Tyrone in the original Broadway production of O’Neill’s Pulitzer Prize- and Tony Award-winning Long Day’s Journey into Night, which was also directed by Quintero; Robards appeared in the lead role of James Tyrone Sr., in a 1988 production of the same play. Other O’Neill plays directed by Quintero and featuring Robards included Hughie (1964), A Touch of the Poet (1977), and A Moon for the Misbegotten (1973). He repeated his role in Long Day’s Journey into Night in the 1962 film and televised his performances in A Moon for the Misbegotten (1975) and Hughie (1984). 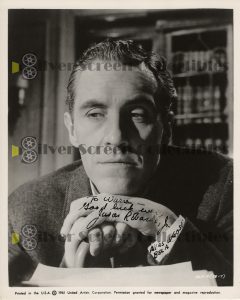