We use cookies to ensure that we give you the best experience on our website Close
View cart “Margaret O’Brien” has been added to your cart.

Inscription: To Dan, “Meet Me in St. Louis”

Biography: ​From Wikipedia, the free encyclopedia

Margaret O’Brien (born January 15, 1937) is an American film and stage actress. Although her film career as a leading character was brief, she was one of the most popular child actors in cinema history. In her later career, she appeared on stage and in supporting film roles.

She was born Angela Maxine O’Brien; (she later changed her name to Margaret following the success of the film Journey for Margaret, in which she played the title role). Her father Lawrence O’Brien, a circus performer, died before she was born.[1]; Margaret’s mother, Gladys Flores, was a well-known flamenco dancer who often performed with her sister Marissa, also a dancer. Margaret is of half-Irish and half-Spanish ancestry.

She made her first film appearance in Babes on Broadway (1941) at the age of four, but it was the following year that her first major role brought her widespread attention. As a five-year-old in Journey for Margaret (1942), O’Brien won wide praise for her convincing acting style. By 1943, she was considered a big enough star to have a cameo appearance in the all-star military show finale of Thousands Cheer.

She played a young French girl, and spoke and sang all her dialogue with a French accent, in Jane Eyre (1944). Arguably her most memorable role was as “Tootie” in Meet Me in St. Louis (1944), opposite Judy Garland. O’Brien had by this time added singing and dancing to her achievements and was rewarded with an Academy Juvenile Award the following year as the “outstanding child actress of 1944.” Her other successes included The Canterville Ghost (1944), Our Vines Have Tender Grapes (1945), and the first sound version of The Secret Garden (1949), but she was unable to make the transition to adult roles.

A 1946 Looney Tunes short, Book Revue, placed a caricature of O’Brien in the role of Little Red Riding Hood.

Margaret later shed her child star image in 1958 by appearing on the cover of Life Magazine with the caption “The Girl’s Grown”, and was a mystery guest on the TV panel show What’s My Line?. O’Brien’s acting roles as an adult have been few and far between, mostly in small independent films. However, she does do occasional interviews, mostly for the Turner Classic Movies cable network. She played the role of Betsy Stauffer, a small town nurse, in “The Incident of the Town in Terror” on television’s Rawhide. Another rare television outing was as a guest star on the popular Marcus Welby, M.D. in the early 1970s, reuniting Margaret with her Journey For Margaret and The Canterville Ghost co-star Robert Young.

Description above from the Wikipedia article Margaret O’Brien, licensed under CC-BY-SA, full list of contributors on Wikipedia. 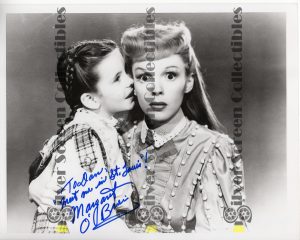