We use cookies to ensure that we give you the best experience on our website Close
View cart “Mark Allen Shepherd” has been added to your cart.

Mark Allen Shepherd is an actor, best known for his role as Morn on Star Trek: Deep Space Nine. He also appeared in two episodes of Star Trek: The Next Generation and Star Trek: Voyager uncredited. Shepherd received a Bachelor of Science degree in biology from Roger Williams University in Rhode Island. After graduation, he moved to Southern California and studied at the California Institute of the Arts, focusing on music, film, theater, performance, and interdisciplinary arts.

Shepherd is an artist and has created numerous abstract impressionist paintings, mixing media types into photomosaics. Twenty-three of his works have been used as set dressing on Star Trek: Deep Space Nine. Shepherd is also a member of Plural Dolt, an absurd music theater group based in Los Angeles. In 2009, Shepherd voiced the role of Alex Miller on the fan produced audio series Star Trek: The Continuing Mission Description above from the Wikipedia article Mark Allen Sherpherd, licensed under CC-BY-SA, full list of contributors on Wikipedia. 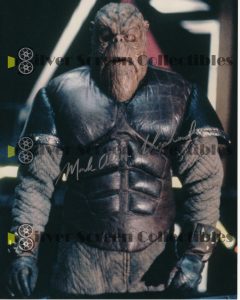