Condition: Very Good to Fine
Please check the included image closely to assist you in your purchasing decision.

Biography: Maureen Stapleton was an American actress in film, theater and television, who moved to New York City at the age of 18, doing modeling to pay the bills. She once said that it was her infatuation with the handsome Hollywood actor Joel McCrea which led her into acting. She made her Broadway debut in the production featuring Burgess Meredith of The Playboy of the Western World in 1946. That same year, she played the role of Iras in Shakespeare’s “Antony and Cleopatra” in a touring production by actress and producer Katharine Cornell. Stepping in because Anna Magnani refused the role due to her limited English, Stapleton won a Tony Award for her role in Tennessee Williams’ The Rose Tattoo in 1951. Stapleton played in other Williams’ productions, including Twenty-Seven Wagons Full of Cotton and Orpheus Descending (and its film adaptation, The Fugitive Kind, co-starring her friend Marlon Brando), as well as Lillian Hellman’s Toys in the Attic. She won a second Tony Award for Neil Simon’s The Gingerbread Lady, which was written especially for her, in 1971. Later Broadway roles included “Birdie” in The Little Foxes, opposite Elizabeth Taylor, and as a replacement for Jessica Tandy in The Gin Game.

Stapleton’s film career, though limited, brought her immediate success, with her debut in Lonelyhearts earning a nomination for an Academy Award for Best Supporting Actress. She appeared in the 1963 film version of Bye Bye Birdie, in the role of Mama Mae Peterson, with Dick Van Dyke, Janet Leigh, Paul Lynde, and Ann-Margret. Stapleton played the role of Dick Van Dyke’s mother, even though she was only five months and 22 days older than Van Dyke. She was nominated again for an Oscar for Airport and Woody Allen’s Interiors. She won the Best Supporting Actress Oscar for Reds, directed by Warren Beatty, in which she portrayed the Lithuanian-born anarchist, Emma Goldman.

Stapleton won a 1968 Emmy Award for her performance in Among the Paths of Eden. She was nominated for the television version of All the King’s Men, Queen of the Stardust Ballroom, and The Gathering. Her later appearances included Johnny Dangerously, Cocoon, and its sequel Cocoon: The Return. She was inducted into the American Theatre Hall of Fame in 1981. She was an alumna of the famous Actors Studio in New York City, led by Lee Strasberg. 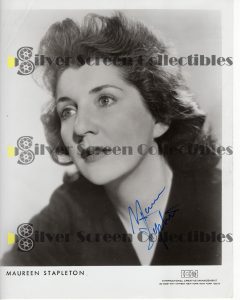