This is a huge 16″ x 20″ color photo hand signed by JACK SPARROW himself… JOHNNY DEPP. This is an outstanding image of Depp as everyone’s favorite pirate, and at 16″x20″ it makes quite the statement! With the big and bold PSA/DNA certified signature, this photo is bound to be a favorite piece in your collection!

Condition: Fine – With very minor handling wear.
Please check the included image(s) closely to assist you in your purchasing decision.

John Christopher “Johnny” Depp II (born June 9, 1963 in Kentucky) is an American actor and musician. He has been nominated for three Academy Awards and has won the Golden Globe and Screen Actors Guild Awards for Best Actor.

Depp rose to prominence on the 1980s television series 21 Jump Street, becoming a teen idol. Turning to film, he played the title character of Edward Scissorhands (1990), and later found box office success in films such as Sleepy Hollow (1999), Pirates of the Caribbean: The Curse of the Black Pearl (2003), Charlie and the Chocolate Factory (2005), and Rango (2011). He has collaborated with director and friend Tim Burton in seven films, including Sweeney Todd: The Demon Barber of Fleet Street (2007) and Alice in Wonderland (2010). Depp has gained acclaim for his portrayals of people such as Edward D. Wood, Jr., in Ed Wood, Joseph D. Pistone in Donnie Brasco, Hunter S. Thompson in Fear and Loathing in Las Vegas, George Jung in Blow, and the bank robber John Dillinger in Michael Mann’s Public Enemies.

Films featuring Depp have grossed over $2.6 billion at the United States box office and over $6 billion worldwide. He has been nominated for top awards many times, winning the Best Actor Awards from the Golden Globes for Sweeney Todd: The Demon Barber of Fleet Street and from the Screen Actors Guild for Pirates of the Caribbean: The Curse of the Black Pearl. He also has garnered a sex symbol status in American cinema, being twice named as the Sexiest man alive by People magazine in 2003 and 2009.

Jack Sparrow, a freewheeling 18th-century pirate, quarrels with a rival pirate bent on pillaging Port Royal. When the governor’s daughter is kidnapped, Sparrow decides to help the girl’s love save her. 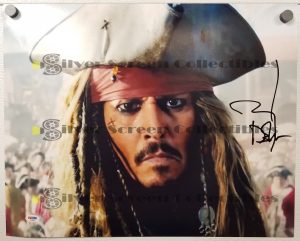 You're viewing: Johnny Depp Pirates of the Caribbean SIGNED PHOTO $275.00
Add to cart