This is a once in a lifetime opportunity to own an amazing piece of Hollywood history! This (amateur) framed display holds a typed comedy sketch by legendary funnyman Morey Amsterdam (on his signature personal stationary) which he wrote for lifelong friend Rose Marie. Alongside Morey’s typed script is a single page handwritten page on which Rose Marie provided her feedback and thoughts on Morey’s outline. This is an amazing opportunity to experience the collaborative efforts of these two comedy greats. These historic Hollywood artifacts are directly from Rose Marie’s estate, and come with Letter of Authenticity signed by Rose Marie’s daughter. The frame measures 17″ x 21″. Although Rose Marie became a household name through The Dick Van Dyke Show (1961–1966) – (Carl Reiner, Dick Van Dyke, Mary Tyler Moore, Morey Amsterdam), she started out as a child star in vaudeville. If you haven’t had a chance to see the Rose Marie documentary “Wait for Your Laugh” (2017), do yourself a favor and check it out. In 1961 when DVD Show series creator Carl Reiner was looking for an actor to round out the trio of comedy writers for the show, Rose Marie pitched her personal comedy writing partner Morey Amsterdam for the part, and comedy history was made.

Note: Please use the Contact Us link if you would prefer to purchase this item unframed to save on shipping costs.


Condition: Both 8.5″ x 11″ pages are in excellent (used) condition. We apologize for the glare and reflections on the glass of this framed display.
Please check the included images closely to assist you in your purchasing decision.

Biography: Rose Marie Mazetta, known professionally as Rose Marie, was an American actress. As a child performer she had a successful singing career as Baby Rose Marie. A veteran of vaudeville, Rose Marie’s career included film, records, theater, night clubs and television. Her most famous role was television comedy writer Sally Rogers on the CBS situation comedy The Dick Van Dyke Show. She later portrayed Myrna Gibbons on The Doris Day Show and was also a frequent panelist on the game show Hollywood Squares.

Biography: Morey Amsterdam was an American television actor and comedian, best known for his role of wise-cracking comedy writer Buddy Sorrell on The Dick Van Dyke Show (1961–1966). Morey also starred in the film “Don’t Worry, We’ll Think of a Title” (1966), with Dick Van Dyke Show alums Rose Marie and Richard Deacon. This hard to find title also features Moe Howard of the Three Stooges. Morey had another Stooge connection; he and Shemp Howard of the Three Stooges were very close friends (and both hilariously funny men!) 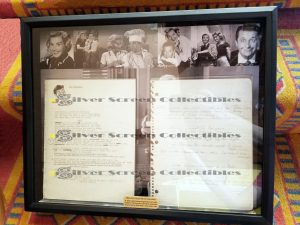