An amazing SIGNED original / vintage production ANIMATION CEL (with original production background) from STAR TREK THE ANIMATED SERIES (1973–1974). Adding to the desirability / collectibility of this rare cel, it has been personally signed by Captain James T. Kirk himself! When signing the cell, Mr. Shatner included “Captain Kirk” just under his signature. We had Beckett (who was onsite) certify the signature, and they issued a full certificate. Along with the Beckett certification, we have included a photo of Mr. Shatner holding the cel just after he signed it at the Hollywood Collectors Show in Los Angeles! This great item is Star Trek fan, or animation collectors dream come true!!

The animated adventures of Captain Kirk, Mr. Spock and the crew of the Starship Enterprise.

William Shatner is a Canadian actor, musician, singer, author, film director, spokesman and comedian. He gained worldwide fame and became a cultural icon for his portrayal of Captain James Tiberius Kirk, commander of the Federation starship USS Enterprise, in the science fiction television series Star Trek, from 1966 to 1969; Star Trek: The Animated Series from 1973 to 1974, and in seven of the subsequent Star Trek feature films from 1979 to 1994. He has written a series of books chronicling his experiences playing Captain Kirk and being a part of Star Trek, and has co-written several novels set in the Star Trek universe. He has also authored a series of science fiction novels called TekWar that were adapted for television. 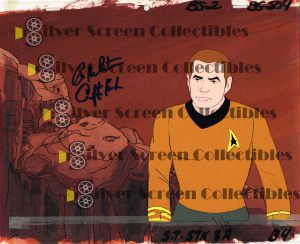