This is a rare original/production ANIMATION DRAWING of Woody Woodpecker, that has been signed by creator Walter Lantz. It measures roughly 12.5″ x 10.5″.

Condition: Very Good to Fine – With handwritten production notes, as well as a small chip out of the left edge.
Please check the included image(s) closely to assist you in your purchasing decision.

Woody Woodpecker is a cartoon anthropomorphic woodpecker that has appeared in theatrical short films produced by the Walter Lantz Studio and distributed by Universal Studios between 1940 and 1972.

He was created in 1940 by Lantz and storyboard artist Ben “Bugs” Hardaway, who had previously laid the groundwork for two other screwball characters, Bugs Bunny and Daffy Duck, at the Warner Bros. cartoon studio in the late 1930s. Woody’s character and design evolved over the years, from an insane bird with an unusually garish design to a more refined looking and acting character in the vein of the later Chuck Jones version of Bugs Bunny. Woody was originally voiced by prolific voice actor Mel Blanc, who was succeeded in the shorts by Danny Webb, Kent Rogers, Ben Hardaway, and, finally, Grace Stafford (wife of Walter Lantz).

Woody Woodpecker cartoons were first broadcast on television in 1957 under the title The Woody Woodpecker Show, which featured Lantz cartoons bookended by new footage of Woody and live-action footage of Lantz. Lantz produced theatrical cartoons longer than most of his contemporaries, and Woody Woodpecker remained a staple of Universal’s release schedule until 1972, when Lantz finally closed down his studio. 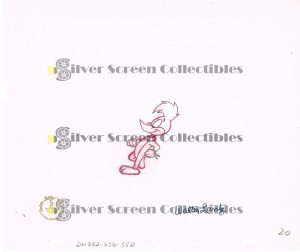