Inscription: To Bill, from the other Bill

Orr began his career as an actor; his film credits include The Mortal Storm, The Gay Sisters, and The Big Street.

As the first head of Warner Bros. Television department, Orr forged a fruitful alliance with ABC, which resulted in the network having a number of prime time hits, such as Maverick, 77 Sunset Strip, and F Troop. At the height of this relationship in the early 1960s, Orr had nine programs in prime time simultaneously. Of these, no program was more significant than one of his earliest, Cheyenne. It was a groundbreaking series that was both the first hour-long western and the first series of any kind made by a major Hollywood film studio consisting entirely of content wholly exclusive to television.

A curator at The Paley Center for Media (previously named The Museum of Television and Radio) once encapsulated Orr’s importance to Warner Bros. by saying, “Television began as a step-child. But because of Orr, it became equal with film in creating revenue and jobs for the studio.” One of the key reforms he made to effect this change was to move Warner’s nascent television department from cramped quarters in New York City to Los Angeles studios separate from the film division.

His impact on the genre of western fiction was recognized with a Golden Boot Award upon the announcement of his death. 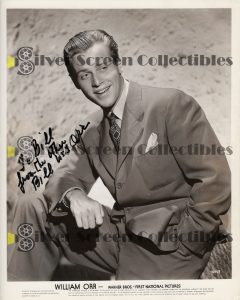